Michaela: Thank goodness Xmas is over ... and we can ditch that silly red clothing-and those stupid plastic antlers! 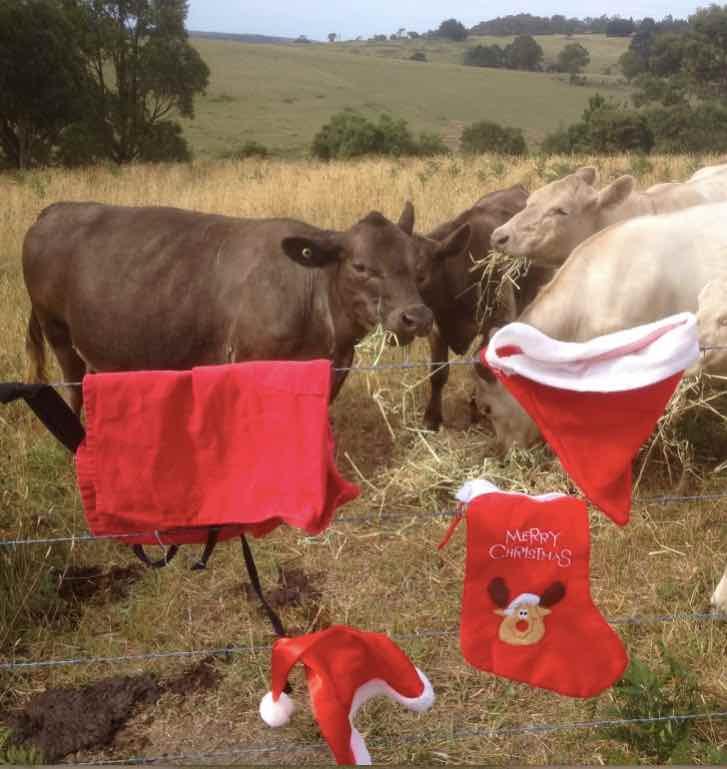 And we can get back to eating a square meal, which for us Square Meaters is grass ... and lots of it.

Our small heard can chew through an acre and more a day ... then sit down and eat it all again!

Sorry for the break in transmission, by the way, but our interpreter/reporter fell down on the job, so to speak, and is only just back on his feet.'

So stand by for more news and views from 'The Southern Highlands Home of Square Meaters.'

Misty: I'm not really as sad as I might look ... or have reason to given the arrival of our latest "livestock."

It's a four-legged friend for me, so I heard, but forgive me if I thought for a moment that I might be

But we're getting along fine now, little Lulu and I ... now that she understands that I carry seniority (and can jump into the back of the car while she has to wait for a lift!)

Plenty happening around the farm, so stay tuned ...

Little Richard:  Hi, on this my first Australia Day which for most people - and quite a few of my own kind I hear - seems to centre around barbecues!

Not so here at Green Pastures Farm, though ... where it seems to have been just another day of hard work for our farmers - although Fran seems to have spent most of her time on her knees ...

... while Collin has been preoccupied with the latest arrival at the farm.

We heard it was going to be a Stag, but it's definitely mechanical rather than animal, and while it doesn't look like any type of agricultural equipment we've seen before, Collin has been heard to describe it as a Triumph!

It's certainly got a

throaty roar, but we're yet to see how it might be put to use around the place!

As for me and my cousins, we're now acquiring a taste for the grass which is growing in such abundance due to recent rains that we often can't see each other over pasture that even comes up to Farmer Coll's waist. Ah ... perhaps that's a new grass cutter he's been polishing ever since it arrived!?!?!

There again, we couldn't see very much at all first thing today, the whole farm enveloped in mist. 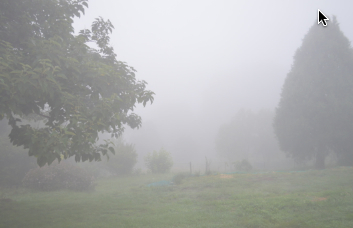 But it did clear later in the day, and we were able to see what we we 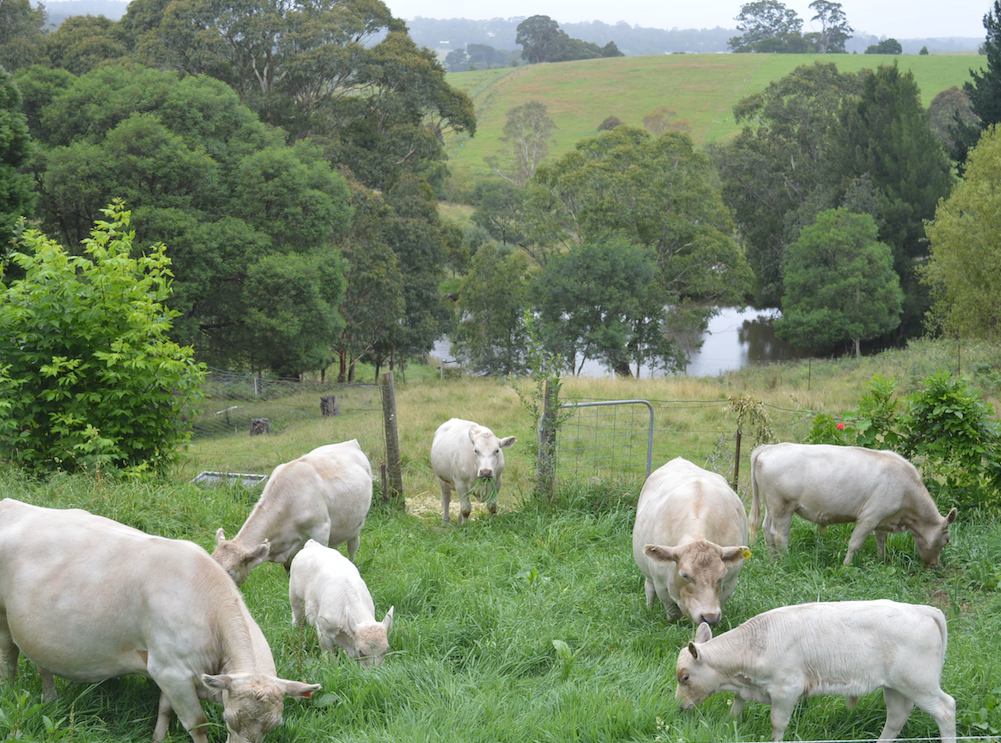 MICHAELA: Our blogger may have taken a bit of a break, but I can assure you, we've all been 'heads down and bums up' ...through what has been an amazingly wet and warm summer of exceptional pasture growth.
I'm taking the lead in resuming our story because I'm proud to report that two of my offspring have just won prizes at the big Canberra Show! 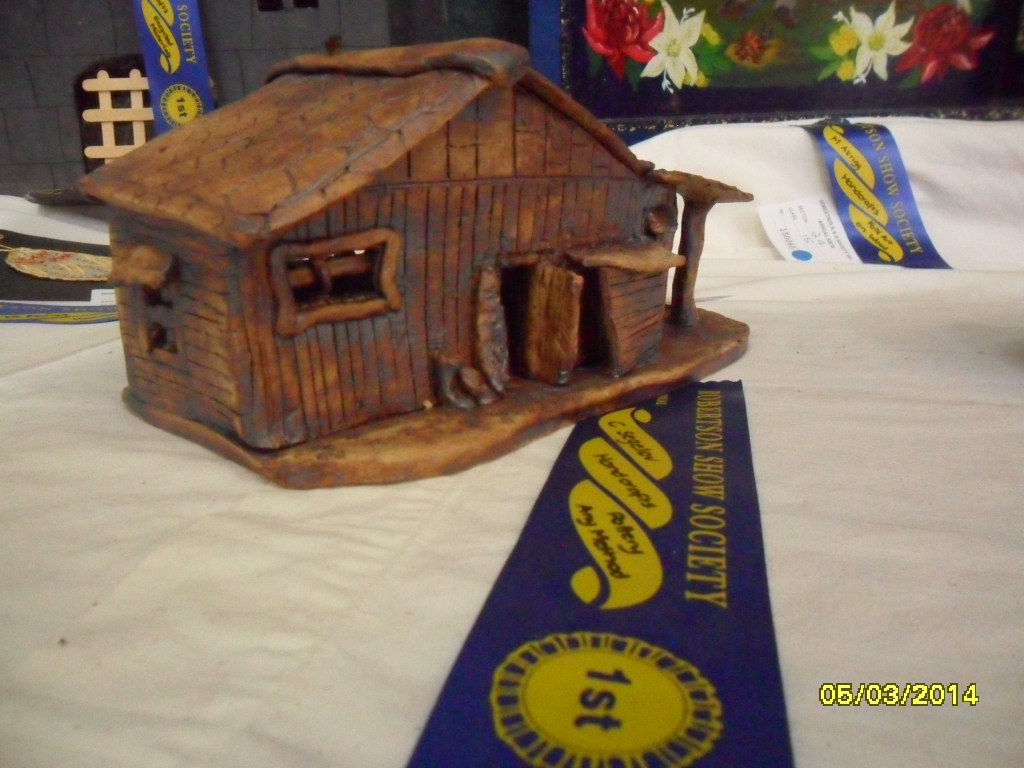 Mind you, Collin thinks he's deserving a mention for winning first prize in the handicrafts section of the local Robertson Show with one of his early settlers' cottages in pottery. 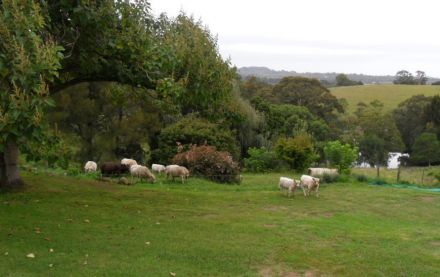 Meantime, my mummy mates and our superfast-growing-youngsters had a treat today (with Fran away), Collin letting us into the back garden! He said it was for us to see what Fran was doing with the garden, but we suspect it was more to do with us doing his mowing!

Oh, I nearly forgot ... there appears to be a new tractor or something of the sort at Green Pastures Farm ... take a look for yourself! 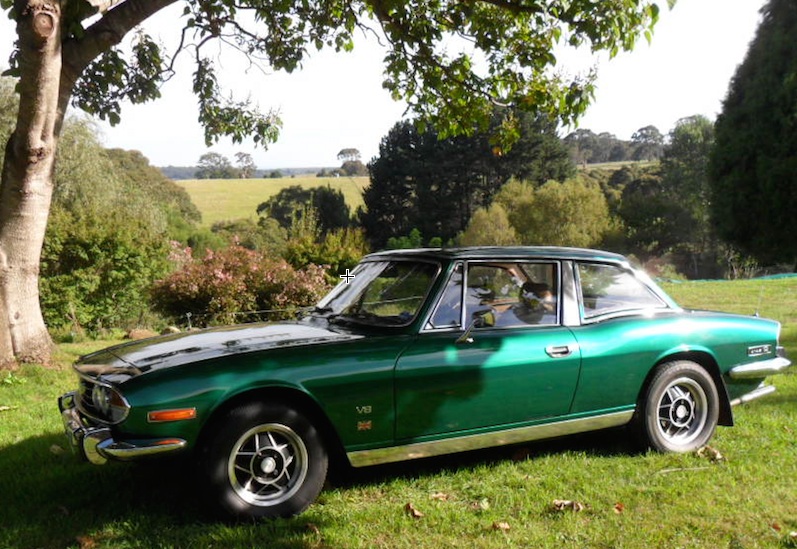 Is that a Water Tank on the hill in the distant background? Given the V8 emblem on the green machine, it might be better if it was a Petrol Tank!

MICHAELA: Hello again. It's back to my turn for an update on all things GPF, where visitors as well as us residents stand to be poked with something red hot! 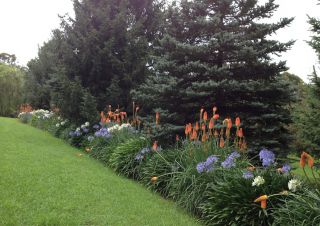 That's red hot pokers I'm talking about ... of the hoticultural variety, of course, not the torture chamber type ... and they certainly look impressive this year, marching along our front farm fence.

But, if you want to see something really impressive, take a look at my calf!

You have to admit, that's really SOMEthing.  Growing with leaps and bounds - literally, the three cousins spending their days running and jumping ... drinking and then sleeping, all in roughly equal proportions!

But, as you see, we're enjoying plentiful feed, sun and shade.

With lots of (welcome) rain lately, you really couldn't want a better place - man or beast! 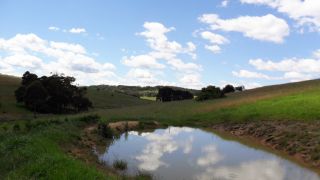